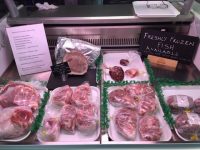 Don’t miss out, this will be the last delivery of lamb until September!

A little about the Wiltshire Longhorn:
The breed was saved from extinction by a small group of enthusiastic breeders who formed the Wiltshire Horn Sheep Society in 1923.  In the 1970’s the breed came under the protection of the Rare Breeds Survival Trust due to low numbers.
The demand for wool is so low that its production has become uneconomic. The Wiltshire Horn has a short fleece that naturally sheds in the spring leaving a short hair coat, as the picture shows. The fleece then starts to grow again in the autumn to provide protection for the winter months. This self shedding ability eliminates the time and cost involved in gathering sheep for shearing, dagging and dipping, and for the small flock keeper, the difficulty in finding shearers willing to shear small numbers of sheep.

The Wiltshire Horn produces fabulously full flavoured meat as now demanded by an increasingly discerning public. Lambs have the ability to grow to heavy weights without putting on excess fat to meet modern grading requirements and are able to finish off grass. The meat is of exceptional quality.

Also just arrived, not just one but two of the wonderful Italian Roast Hams.  We buy these from a very glamorous young organic pig producer in Mantova.  Elisa roasts the hams in herbs and honey to give the flavour that has become so popular in our Deli.  Summer salads, sandwiches or just go for ham and eggs…..