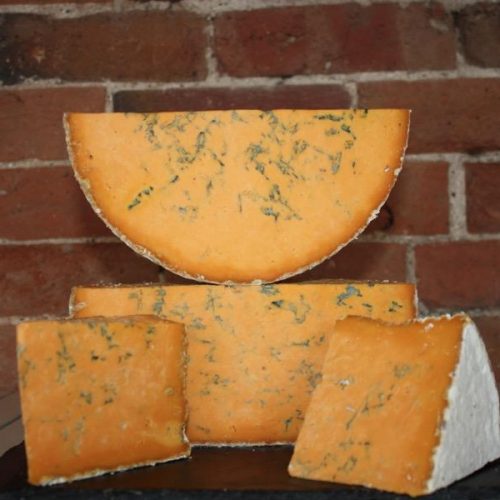 Traditionally made blue cheese with the addition of natural colouring Annato, to give Shropshire Blue its classic ‘orange’ hue.

4 in stock (also available on backorder)

Despite its name, Shropshire Blue isn’t actually made in Shropshire, nor has it ever been. It was originally made in Scotland and is now made in the Stilton producing regions of Nottinghamshire, Leicestershire and Derbyshire. Geographical confusion aside, Shropshire Blue is a wonderful cheese. The taste and appearance, especially the veining is rather similar to that of a Stilton but there is a much more colour to Shropshire Blue due to the addition of the natural dye annatto. The texture is also somewhat firmer than a typical Stilton.

Shropshire Blue is made by renowned Stilton makers Cropwell Bishop and the cheese making process is a pleasure to behold. The evening and morning milk are combined before the addition of the starter culture, rennet (vegetarian) and penicillium roqueforti which provided the blue colouring over time. Once the curds form, the whey is drained off and the curds allowed to settle before they are milled, salted and then hand ladled into their moulds. These moulds are removed after a week and the formed cheeses are allowed to mature for a further 4 weeks before they are pierced and the blue veining can start to form. The cheeses are then matured for their full term.

Shropshire Blue is a tasty and attractive addition to a cheese board but there are other equally exciting ways to enjoy this cheese. For example, in a toasted sandwich along with roasted sweet peppers and caramalised walnuts or in a salad with honey, macadamia nuts and port dressing.

This cheese is suitable for vegetarians.